Please note: If you want to book this tour 8 hours before the date

If we confirm availability you can buy it.

10.30am Visit Pisa (time to see the famous Leaning Tower)

3.30pm Visit Vinci, the birthplace of Renaissance polymath Leonardo da Vinci “the Genius”. Main sights: Museo Leonardiano, museum of Leonardo da Vinci. This museum has displays of some of the inventions that are drawn in Leonardo’s notebooks.

5.30pm Return at our meeting point. End of the tour.

Drive Through Tuscany and Discover Vinci (The famous Leonardo da Vinci “Genius” town, Chianti & San Gimignano – You will visit either a first-class winery that will give you a wine tour, wine tasting, extra virgin olive oil tasting and balsamic vinegar tasting included tuscan authentic lunch. Join other travellers who share your passion and make your friends. By far the most famous of the Tuscan wines, Chianti is a red wine produced in the Chianti region and is made from the Sangiovese grape, giving it a note of summer fruit and spices. Wine Tasting experience (Chianti, Chianti Classico, Supertuscan, Pinot, Vernaccia from San Gimignano, Brunello from Montalcino and Nobile from Montepulciano)

Your excursion will commence with a drive through the breathtaking Tuscan countryside as you delve into the heart of the Chianti Classico region. Over the course of the tour, you will visit two first-class wineries that will give you a comprehensive look at the wine making process.

Our experienced guides will be with you every step of the way, teaching you about the wines and the best ways to taste them. In addition to Chianti Classico the DOCG (Denominazione di Origine Controllata e Garantita) wines, you will be able to enjoy the IGT (Indicazione Geografica Tipica) or “Super Tuscans.”

In Vinci, where Leonardo was born and where he drew early inspiration for his studies and paintings, the Leonardo Museum presents one of the most extensive and most original collections devoted to the multiple interests of Leonardo  the technologist,  the architect, the man of science and, more generally, to the History of Renaissance technics. The museum route, spread over two adjacent buildings: the Palazzina Uzielli and the Conti Guidi Castle, presents its machines and models accompanied by specific references to the artist’s sketches and handwritten notes, which are also supplemented by digital animations and interactive applications.

In the Castle, the ancient former home of the Guidi family, are the machines and models which document Leonardo’s interest in war, architecture, mechanics and flight. In addition, there are two whole sections devoted to optics and to movement on land and water, with particular reference to fluvial navigation. The route ends in the video room located inside the mighty walls of the castle, and where the models of the geometric solids based on the drawings that Leonardo made for the treatise De Divina Proportione by the mathematician Luca Pacioli are on show.

Casa Natale di Leonardo, the birthplace of Leonardo da Vinci, situated approximately 3 km to the northeast of Vinci in the frazione of Anchiano. There are some reproductions of his drawings at the house. 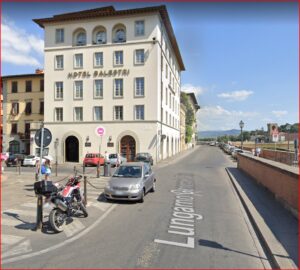 Leonardo da Vinci (15 April 1452 – 2 May 1519) was an Italian polymath of the High Renaissance who was active as a painter, draughtsman, engineer, scientist, theorist, sculptor and architect. While his fame initially rested on his achievements as a painter, he also became known for his notebooks, in which he made drawings and notes on a variety of subjects, including anatomy, astronomy, botany, cartography, painting, and paleontology. Leonardo’s genius epitomized the Renaissance humanist ideal, and his collective works compose a contribution to later generations of artists matched only by that of his younger contemporary, Michelangelo.

Born out of wedlock to a successful notary and a lower-class woman in, or near, Vinci, he was educated in Florence by the renowned Italian painter and sculptor Andrea del Verrocchio. He began his career in the city, but then spent much time in the service of Ludovico Sforza in Milan. Later, he worked in Florence and Milan again, as well as briefly in Rome, all while attracting a large following of imitators and students. Upon the invitation of Francis I, he spent his last three years in France, where he died in 1519. Since his death, there has not been a time where his achievements, diverse interests, personal life, and empirical thinking have failed to incite interest and admiration, making him a frequent namesake and subject in culture.

Leonardo is among the greatest painters in the history of art and is often credited as the founder of the High Renaissance. Despite having many lost works and less than 25 attributed major works—including numerous unfinished works—he created some of the most influential paintings in Western art. His magnum opus, the Mona Lisa, is his best known work and often regarded as the world’s most famous painting. The Last Supper is the most reproduced religious painting of all time and his Vitruvian Man drawing is also regarded as a cultural icon. In 2017, Salvator Mundi, attributed in whole or part to Leonardo, was sold at auction for US$ 450.3 million, setting a new record for most expensive painting ever sold at public auction.

Revered for his technological ingenuity, he conceptualized flying machines, a type of armored fighting vehicle, concentrated solar power, an adding machine, and the double hull. Relatively few of his designs were constructed or even feasible during his lifetime, as the modern scientific approaches to metallurgy and engineering were only in their infancy during the Renaissance. Some of his smaller inventions, however, entered the world of manufacturing unheralded, such as an automated bobbin winder and a machine for testing the tensile strength of wire. He made substantial discoveries in anatomy, civil engineering, geology, optics, tribology, and hydrodynamics, but he did not publish his findings and they had little to no direct influence on subsequent science.

During his lifetime, Leonardo was also valued as an engineer. With the same rational and analytical approach that moved him to represent the human body and to investigate anatomy, Leonardo studied and designed many machines and devices. He drew their “anatomy” with unparalleled mastery, producing the first form of the modern technical drawing, including a perfected “exploded view” technique, to represent internal components. Those studies and projects collected in his codices fill more than 5,000 pages. In a letter of 1482 to the lord of Milan Ludovico il Moro, he wrote that he could create all sorts of machines both for the protection of a city and for siege. When he fled from Milan to Venice in 1499, he found employment as an engineer and devised a system of moveable barricades to protect the city from attack. In 1502, he created a scheme for diverting the flow of the Arno river, a project on which Niccolò Machiavelli also worked. He continued to contemplate the canalization of Lombardy’s plains while in Louis XII’s company and of the Loire and its tributaries in the company of Francis I. Leonardo’s journals include a vast number of inventions, both practical and impractical. They include musical instruments, a mechanical knight, hydraulic pumps, reversible crank mechanisms, finned mortar shells, and a steam cannon. 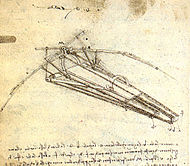 A design for a flying machine (c. 1488), first presented in the Codex on the Flight of Birds. 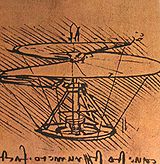 An aerial screw (c. 1489), suggestive of a helicopter, from the Codex Atlanticus. 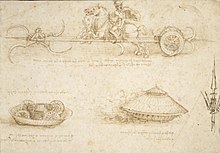 Leonardo’s drawings of a scythed chariot and a fighting vehicle.

Leonardo was fascinated by the phenomenon of flight for much of his life, producing many studies, including Codex on the Flight of Birds (c. 1505), as well as plans for several flying machines, such as a flapping ornithopter and a machine with a helical rotor. A 2003 documentary by British television station Channel Four, titled Leonardo’s Dream Machines, various designs by Leonardo, such as a parachute and a giant crossbow, were interpreted and constructed. Some of those designs proved successful, whilst others fared less well when tested.

Research performed by Marc van den Broek revealed older prototypes for more than 100 inventions that are ascribed to Leonardo. Similarities between Leonardo’s illustrations and drawings from the Middle Ages and from Ancient Greece and Rome, the Chinese and Persian Empires, and Egypt suggest that a large portion of Leonardo’s inventions had been conceived before his lifetime. Leonardo’s innovation was to combine different functions from existing drafts and set them into scenes that illustrated their utility. By reconstituting technical inventions he created something new.

In his notebooks, Leonardo first stated the ‘laws’ of sliding friction in 1493. His inspiration for investigating friction came about in part from his study of perpetual motion, which he correctly concluded was not possible. His results were never published and the friction laws were not rediscovered until 1699 by Guillaume Amontons, with whose name they are now usually associated. For this contribution, Leonardo was named as the first of the 23 “Men of Tribology” by Duncan Dowson.

There are no reviews yet.